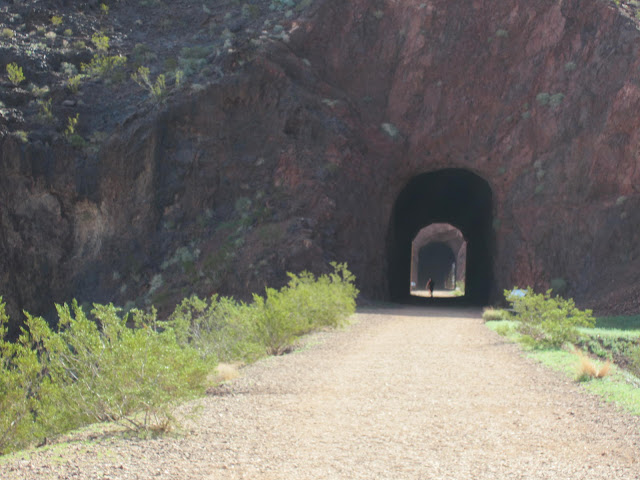 34.  Marijuana is legal!  And there are plenty of dispensaries that will sell you some.
35.  If you go down Ft Apache and look towards the mountains you will see some huge caves.  They aren't really built or designated by anyone, they are just there.
36.  The Boulder Dam Hotel isn't just haunted, it's "ridiculously haunted".
37.  Check out Oatman, there are literally donkey everywhere (don't forget to bring food for them!).
38.  Jump off the Stratosphere; it's the tallest free-standing observation tower in the US at 1149 feet.
39.  On the other hand, you can always climb up all 1149 feet of the Strat (that's 112 floors!).
40.  The worst mass shooting in US history took place in Las Vegas.  While there is no memorial to the event there is a Healing Garden and the Historical Society has possession of all of the artifacts and crosses from the shooting which will occasionally be put on display.
41.  The Pioneer Saloon is part old west, part historical memorial, and part bar.  There are rumors that it is all haunted.  It's a fascinating place to check out.
42.  As far as graveyards go, I've seen better than the ones in Vegas but there are still some interesting celebrity graves to be found here.
43.  No visit to Vegas would be complete without a visit to the Mob Museum which features the infamous St Valentine's Day Massacre Wall.
44.  For a cool, Zen-like experience, head over to Laughlin and check out the labyrinths.
45.  It's a challenging hike but the Carol Lombard Crash Site on Mt Potosi is still a popular excursion for some fans.
46.  Did you know you can go fishing right next to McCarren International Airport and just a couple of miles from the Strip?  You can at Sunset Park!
47.  For a cool adventure (and a rewarding soak afterwards) take a hike out to the Arizona Hot Springs.
48.  No 'weird Las Vegas' list would be complete without a nod to the famous/infamous Area 51.
49.  Las Vegas is synonymous with marriage, here are 10 wild and crazy ways to get married in Vegas.
50.  Did you know that Las Vegas has a$5000(!!) hamburger?  It does.
51.  What's worse than clowns?  A clown motel!  What's worse than a clown motel?  A haunted cemetery right next to a clown motel!  eeekkkk
52.  Apparently you can be anything you want to be in Vegas...SWAT team member, CIA spook...
53.  Bauman Rare Books is the coolest bookstore I've ever been in.  First editions, signed copies, they have a little of everything here.
54.  In a city where you can literally get anything you want, you can't get lottery tickets.  You have to go to Primm for that.
55.  The Railroad Tunnel Trail is a great hike (just watch out for bats in the morning and evening).
56.  There are A LOT of old west style ghost towns near Las Vegas.  Check them out!
57.  Goldfield Nevada deserves its own mention here.  It's a ghost town, has a car forest, a haunted cemetery, and a museum.
58.  First Friday happens, well, the first Friday of every month and draws a little bit of everyone (from the very normal to the very odd) and every thing (art, displays, vendors, etc).
59.  If you are on Facebook you need to join El Nephy's group (People of Las Vegas) he is everywhere, all the time, and his photos are amazing.  At first I thought he was an Uber driver since he seems to be everywhere but a bit of Google-Fu shows he might be a body mover?
60.  For a very cool, very fascinating (and very long) day hike/ride check out the River Mountain Trail.
61.  For the very last of old Vegas' kitchy and cheap diner breakfasts, check out the Rainbow Casino Cafe's $1.99 breakfast special.  It is HUGE!
62.  It's 65 degrees and sunny outside this winter yet people are ice skating outside.  Best of both worlds I guess.
63.  Similarly, it can be 65 degrees and sunny in Las Vegas yet a short 40 minute drive to Mt Charleston can put you in an active snow ski area.
64.  Attending a major event in Las Vegas--with 100,000 other people--is no big deal here.  Las Vegas routinely draws hundreds of thousands of people to events ranging from CES to the Electric Daisy Carnival to the National Finals Rodeo.  Somehow it works.
65.  There are several websites and blogs that help you keep your fingers on the pulse of Las Vegas--from Vital Vegas, to Eater Vegas, to the Las Vegas Adviser.
66.  In a cross between cool, interesting, and OMG, at Dig This you don't even need a driver's license or driving experience to drive a bulldozer or backhoe!  eeekkk